Voice and dialect coaching for actors

An actor with a strong and flexible voice relies not on muscular effort, but on breath, resonance and range

In her coaching for actors, in workshops and in production, Amy draws on her training in New York with world-renowned voice teacher, Kristin Linklater, and is influenced by the work of Cicely Berry, Patsy Rodenburg and Barbara Houseman among other leading voice practitioners.

Amy provides voice and dialect coaching for theatre, film and television productions. She is available to work alongside directors and with actors through pre-production, rehearsals, on set, and in post-production (ADR) to create and maintain the vocal sound of a show.

In addition, Amy conducts workshops to support actors in the development of a free and resonant voice, uninhibited by vocal or physical tension. Experienced actors gain from refreshing and deepening the connection to their voice in a supportive and immersive environment. 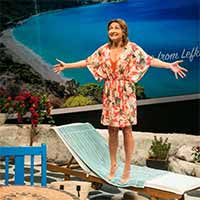 Dates for upcoming workshops are still to be confirmed. Send a message below to register your interest.